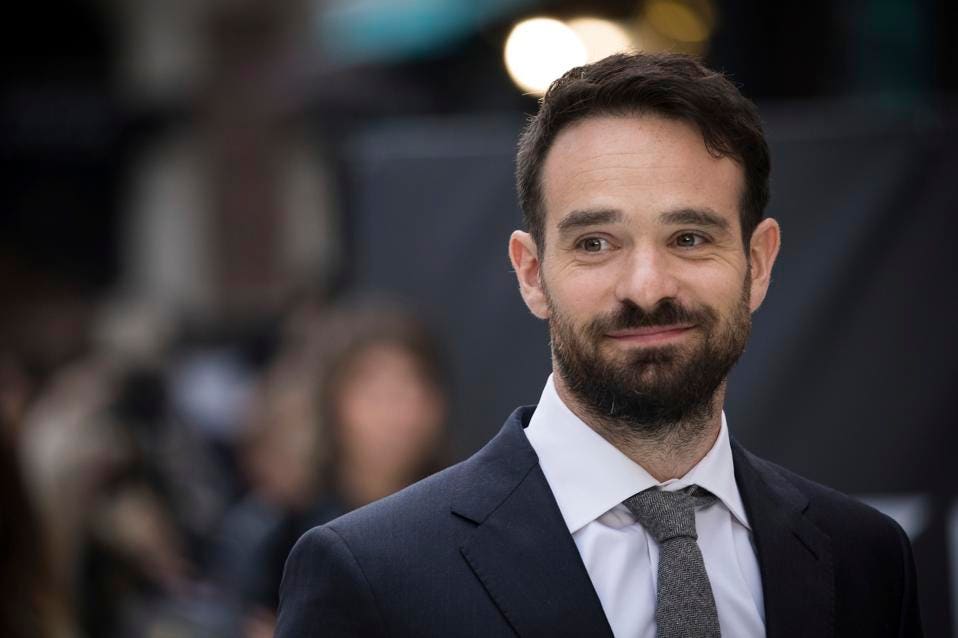 Actor Charlie Cox poses for photographers upon arrival at the world premiere of the film 'King of ... [+]

While the world waits to see if another fan-favorite Marvel Cinematic Universe hopeful makes it to the promised land, those longing for Charlie Cox’s portrayal of Daredevil to grace the MCU would be wise to check out the London native’s current project, Kin.

Cox, who plays Michael Kinsella on the AMC+ eight-episode series that premiered on September 9, finds himself in the middle of a gangland war in Dublin after being released from prison. Michael seems like a changed man devoted to seeing his daughter Anna, but resorting to his old ways may be inevitable.

In episode one, we get a feel for the other Kinsella family members through strong performances from Aidan Gillen (Frank), Clare Dunne (Amanda), Maria Doyle Kennedy (Bridget), Emmett Scanlan (Jimmy), and Sam Keeley (“Viking”) before we meet Michael.

“That's kind of what I was excited about. When I read it, I was excited by the challenge to play someone who you quickly get the impression that the person you're meeting is not the person that the family was expecting to return from prison,” Cox told Forbes via Zoom on Monday.

“I felt like it was an opportunity to play someone who's kind of broken, damaged, vulnerable, quiet, unassuming, speaks when spoken to, is not very boisterous or controlling and yet you can't help but feel that the person that he was in the past is very, very different from him [now].

“My hope was that there would be moments as the episodes come where you get a glimpse into who he had been and who he could still be, what he's still capable of, the kind of violence and aggression that was his daily life not so long ago.”

Shortly after Michael’s release, tragedy strikes and while the family desires retribution, Michael stays devoted to staying on the straight and narrow (so far). The tug of war between Jimmy and Michael in episode two set the table for an acting masterclass with Cox and Scanlan as the professors.

[*Spoiler alert] Although family, Jimmy’s grief in losing his son Jamie to a shooting is at a more heightened level than Michael’s. Scanlan’s performance — perhaps with his eyes alone — in the bar scene is such a powerful mirroring of the anguish one could endure from a slain child that it also took a craftsman like Cox not to play up to it.

“I feel like I knew that Jimmy's grief had to be different than my grief, not for the sake of being different, but just for the sake of the storytelling, it was important that it was different,” Cox said. “I also feel like in that specific example, as sad as Michael might feel, he doesn't really know Jamie anymore.

“He's been away for a long time and his focus is on Anna. ... What I remember thinking was, 'It's got to be a combination of real sad empathy for his brother and his brother's wife and the family as a whole, but also a sense of... I feel Michael would have a sense of it's just more evidence that he just doesn't want a part of this.”

[*Spoiler free] Watching Cox deliver in the uniquely gripping and emotional crime drama shows what Marvel is missing out on every second he’s not plugged into the MCU. The 38-year old found himself playing Daredevil — AKA Matt Murdock — in the Netflix series of the same name for three seasons from 2015-2018 after his 23-episode arc on Boardwalk Empire launched his career onto the rooftops of Hell’s Kitchen. Charlie also played Daredevil in 2017’s The Defenders.

In addition to how many Spideys will appear in Spider-Man: No Way Home, fans were also theorizing Murdock, a lawyer, may be the white-sleeved gentleman that appears hunched over a table near Peter Parker in the teaser trailer released last month. In an interview with ComicBook.com’s Adam Barnhardt, Cox denied it was him.

Similar to former big screen Spider-Man Andrew Garfield, Charlie chooses his words carefully regarding any potential future with Spider-Man or the MCU.

“I don't really mind, I don't really tend to think about it that much. I'm just conscious of when I'm asked about it. I don't want to ruin anything for fans either way,” Cox told Forbes when asked if he was ready for the world to know Daredevil’s fate so it wouldn’t be a perennial query looming around every corner for the actor.

“My answer is no comment; I don't know what's going to happen. I genuinely don't know. If there was a chance of that happening in the future, I don't want to say something that could potentially jeopardize those chances. The people high up at Marvel, maybe they see this stuff or they hear what I say or blah, blah, blah... maybe that influences it.

“I don't know, I have no idea. I love how passionate the fans are and I feel very, very touched that so many of them have gone online and made their voices heard about their desire for me to come back and maybe in the future that might happen, and that would be great. Who knows? We'll see.”

The fact that droves of fans are demanding Cox reprise the role at the highest level, in the MCU, speaks volumes to what he was able to do with the iconic character onscreen already. Charlie is quick to point out the stellar work from Deborah Ann Woll and Vincent D’Onofrio on the Daredevil series, as well as the show runners, but we can probably all agree that from the first take the buck stopped with him.

“It means a great deal. A lot of it is a relief because I felt that pressure when we were shooting the show. I realized how important this character is to so many people,” Cox said of the overwhelmingly positive reception to his Daredevil. “I knew I just had one shot and I wanted to get that right and there's no way of guaranteeing that.

“You just work your socks off and you get stuck in every area of the show that you can, the character, from all of the stunt work to the accent, to the fact that he's a lawyer, the history of the comics — I read everything I could read.

“Just getting stuck in it and hoping that the producers have chosen the right guy. I feel a tremendous relief that it went as well as it did and people have responded so well to my portrayal.”

Charlie had undeniable chemistry with Jon Bernthal’s Punisher in season two of Daredevil. The ferocious controlled chaos of Bernthal’s Frank Castle earned him his own Punisher series for two seasons. Just like Cox, fans want Bernthal in the MCU yesterday.

“He's tremendous isn't he? Look, as soon as someone like Jon is cast it's exciting and it's nerve-wracking at the same time and you know that you've got to bring your A-game,” Cox said of Bernthal. “But also, my experience with actors that good is it actually makes it easier for the other actor because it brings you out of yourself; it forces you to be spontaneous and free and not self-conscious.

“But yeah, we had some intense scenes on rooftops. I remember there were a couple of days where we were shooting like 14 pages in eight hours because it was in the summer, we only had eight hours of darkness.

“One of those nights I was chained to a chimney and we would lose too much time if they had to take me out every time I had a minute. So I pretty much, other than [a meal break] I just sat there chained to a chimney all night just to try to save time so we could get as many takes as possible to get the scene right.”

When asked if he’s rooting for Bernthal to join the MCU like the fans, Cox again chose his words carefully but made them count towards high praise for Jon’s rendition.

“I don't know what the rules are, the deal that Netflix made... Whatever I say it can be taken out of context and it could be a headline that could mean something, so I'm just a little careful with what I say now.

“But, the only thing I'll say is I don't know who could do a better version of The Punisher than Jon Bernthal. And that character is beloved, people are crazy for Frank Castle. So if they're going to do it again, I hope they do it with him because I don't think it gets better than that.

“I feel the same way about Krysten Ritter (Netflix’s Jessica Jones and The Defenders). I know that Jessica Jones, the character isn't quite as well known as Frank Castle is, but what a performance. What a great show that was.”