I was lucky enough to get a role and fit in a show that required me to portray a blind man. I’m not sure how much credit I really deserve, other than just taking it seriously. […]  The way you bring a character to life is in the details—in the little nuances here and there, and so in order to find them, you need to really immerse yourself and discover who that person is.
- Charlie Cox (x)
Wherein Charlie Cox is the nicest guy.   Jun 19th, 2015

Daredevil‘s Charlie Cox—among others like Apple and Ward Marston—was honored at the American Foundation for the Blind’s 19th annual Helen Keller Achievement awards. Cox stars as blind lawyer/superhero Matt Murdock on Netflix and Marvel’s hit show, and we talked to him about what it’s been like to be involved with a project that, through its main character and being Netflix’s first show to offer audio description, has helped raise awareness of accessibility issues for the blind—and tried to get him to spill details on season 2, of course.

Dan Van Winkle (TMS): I read an interview where you said that when you first got the audition for Matt Murdock in Daredevil, you didn’t even know the character was blind.

TMS: What’s it been like transitioning from not even knowing that to working with the NFB and being the face of this character and show that’s helping to raise awareness about accessibility for the blind?

Cox: It’s a very daunting prospect, because you realize how important it is to get that right and to find a consistency and a validity to the performance. In the acknowledgement that this is not quite the same as playing a regular blind person, because obviously he’s a super hero, so I was very nervous about it. I wanted it to be as accurate as it could be.

TMS: Yeah, I kind of met your coach [Joe Strechay, who is blind himself] briefly a minute ago. He worked with you through the whole thing?

Cox: Yeah, I did a bunch of work with him before the show, and we didn’t really know what scenarios would come up, because with a TV show you only get scripts periodically. So we worked as much as we could on the obvious things like household chores and cane technique and walking out in the city together. Then, as things came up and scripts came in, and I had to do different things like making a cup of coffee or whatever, I’d call him up or send him an email saying, “How am I gonna do that?” or “How do I use a braille machine?” or you know, “How would you check your messages?” and he taught me all those skills piece by piece.

It was an incredibly eye-opening, extraordinary experience.

TMS: What’s it like receiving this award? Are there other people who worked with you on the show—and any who are also blind themselves—who you’re grateful to?

Cox: I feel very grateful to be here. I’m an actor, and I was lucky enough to get a role and fit in a show that required me to portray a blind man. I’m not sure how much credit I really deserve. (Smiles.) Other than just taking it seriously, hopefully as I would do with any job, but as a byproduct of a piece of luck, I get to be affiliated with an amazing organization like AFB. So that’s a wonderful kind of happy accident.

TMS: Was that authenticity a big part of the production [of the show] or something that you wanted to bring to it?

Cox: It’s just something that comes from who I am as an actor—as a person. I want all those elements to be as authentic as they possibly can be. The way you bring a character to life is in the details—in the little nuances here and there, and so in order to find them, you need to really immerse yourself and discover who that person is. In this case, it’s a man who was blinded at the age of nine and so has grown up with nine years of sight and is now 28 or 29—twenty years of being physically blind.

But of course he has these heightened senses—these superhuman senses. Which complicate the matter, because what you’ve then got is a man who, although his eyes don’t work, he’s still able to function better than any human that we know of. But he still has to maintain this illusion that he operates like a visually impaired person.

So there’s lots of different elements to it, and one of the things that was very important was to find that consistency—to make sure that the boundaries were clear for the audience.

TMS: With this show being Netflix’s first to have audio description for the blind, and it being such a [culturally] visible thing, what do you think that says about where things are in terms of accessibility?

Cox: Well that was one of the things I was content about. I didn’t know when [Daredevil‘s audio description] was going to happen, and it actually didn’t happen until just after the show was released. I remember Joe asking me when we were midway though production: did I know if it was going to be audio descript. So I was so thrilled when that happened.

I think it’s absolutely vital and incredibly important and good for Netflix to pull the trigger so quickly like that. They were really on it. It says a lot about who they are as a company, and I believe now all their shows are going that direction. They’re in the process of making all their shows accessible to people who are visually impaired. It’s brilliant; it’s a great thing.

Joe is always telling me about what films he’s just seen or what shows he likes, and what he thinks of them, and it makes it a lot easier if he has audio descript for that.

TMS: That’s great. (We’re out of time.) … Is there anything you can tell me about season 2 or Elektra?

Cox: (Laughs heartily before the question is even fully out of my mouth.) No. Nope.

Cox: Sadly not. Yeah, it’s actually quite fun to get that question, because everyone who knows anything about Marvel knows that I can’t answer it. (Laughs)

At that point, the interview was technically over, and I put my voice recorder away and thanked Cox for doing such a great job on the show and working with AFB, because my father is blind. Ever a nice and talkative guy, he hung back with me a little longer and asked if my dad had always been blind or lost his eyesight later in life. (He’s been blind for around 15 years.)

He explained that the difference in whether or not a blind person had ever been able to see was an important one to him in playing his character, and one of the things he did while preparing for Daredevil was watch Scent of a Woman as a bit of research on portraying those differences. He mentioned that on the other side of that, there’s a particularly interesting episode of This American Life, called “Batman,” about a boy who grew up blind and began using echolocation-like sounds from an early age to navigate his surroundings. Clearly, he’d done his homework.

Cox wasn’t the only one receiving an award last night, though, and one of the best stories I heard from him was in talking to and about one of the other honorees: Apple. Apple’s award was for their blind accessibility feature on their devices called VoiceOver—a feature that’s been life-changing for my dad by allowing him to use his iPhone better than he uses a desktop computer.

Cox said Strechay taught him how to use the feature in preparation for the show, but it was one of those things where he didn’t know what he’d need ahead of time, and they didn’t wind up using Apple products in Daredevil. However, he said that while he was sitting for the Daredevil mask to be created and shaped around his face, with the top half of his face completely covered, his phone started going off with notifications, and he panicked before realizing he knew exactly what to do.

“I said, ‘Wait, I know how to do this!'” he said and apparently had no trouble checking all of his messages and alerts thanks to Strechay’s training. And that’s why accessibility options are so important—they can literally make the impossible possible just by taking some time to think of how to make sure everyone’s needs are accounted for. Congratulations to all of the Helen Keller Achievement Award honorees this year for making the world a better place. 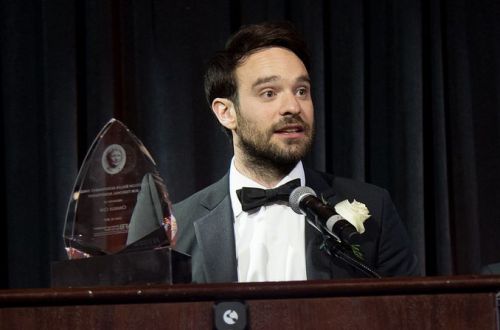 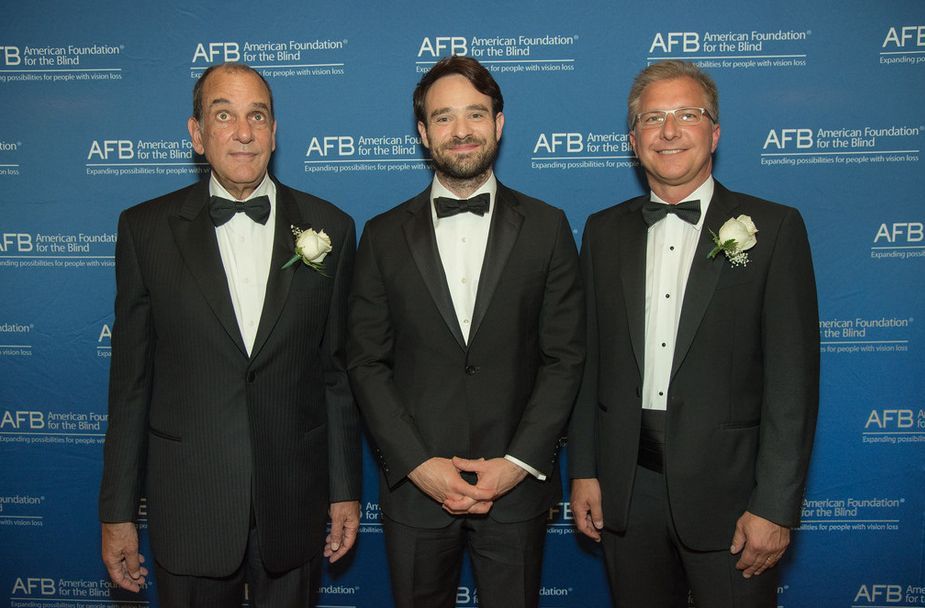 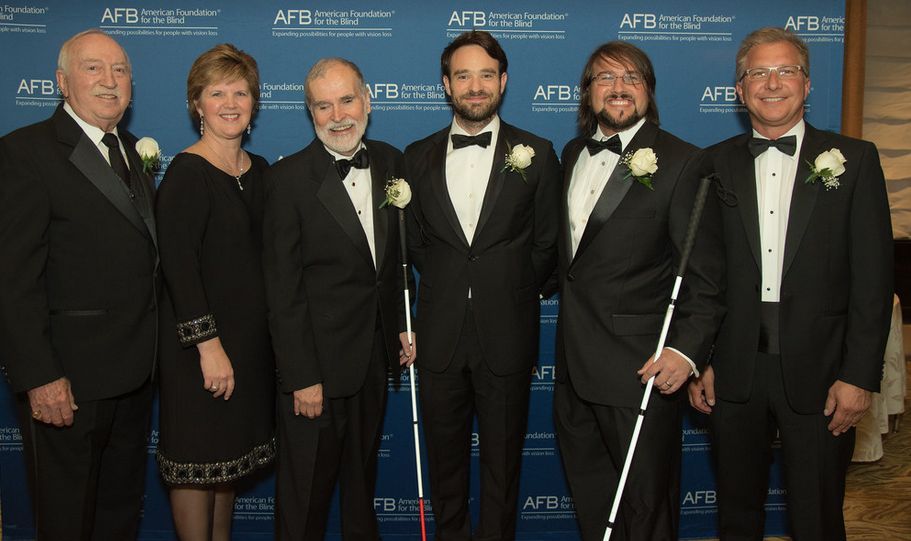 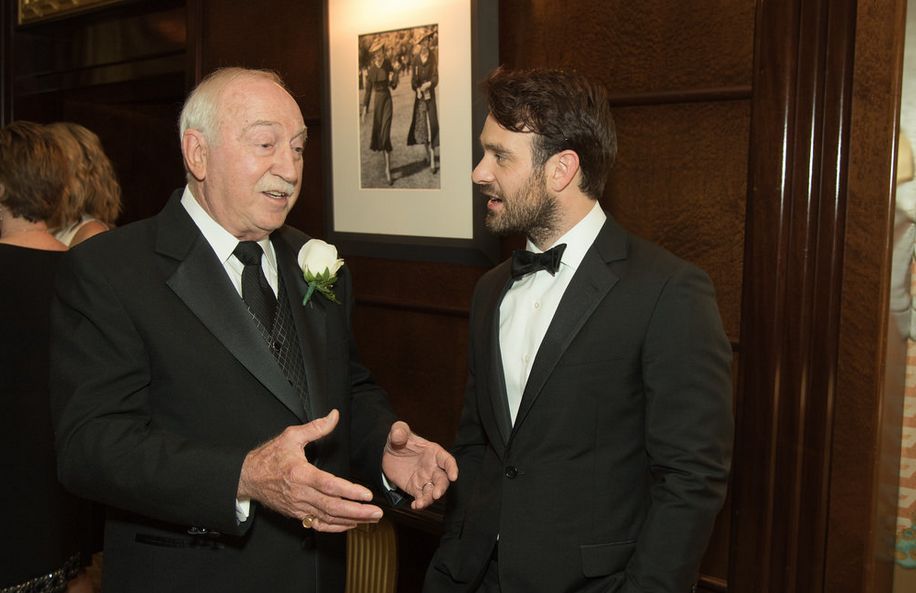 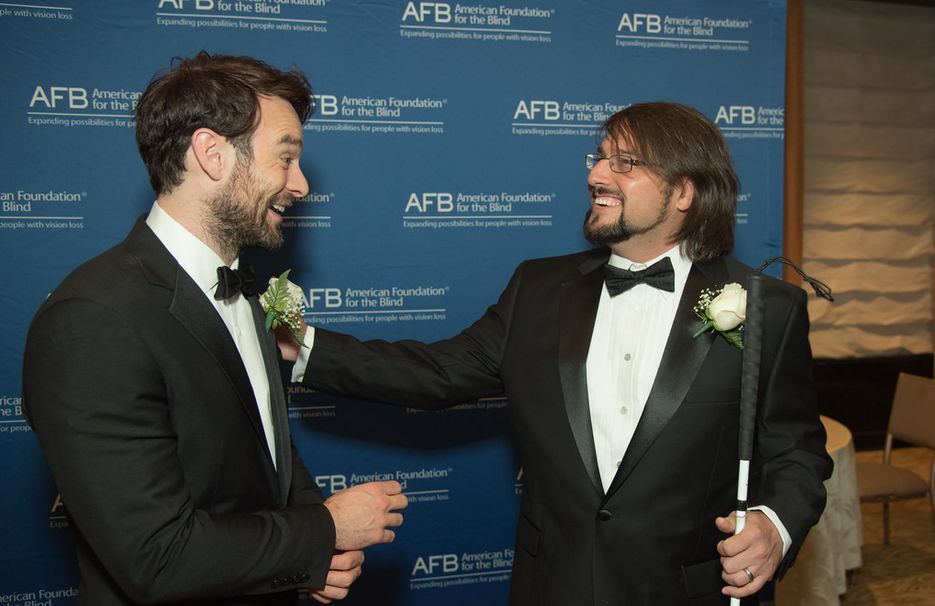 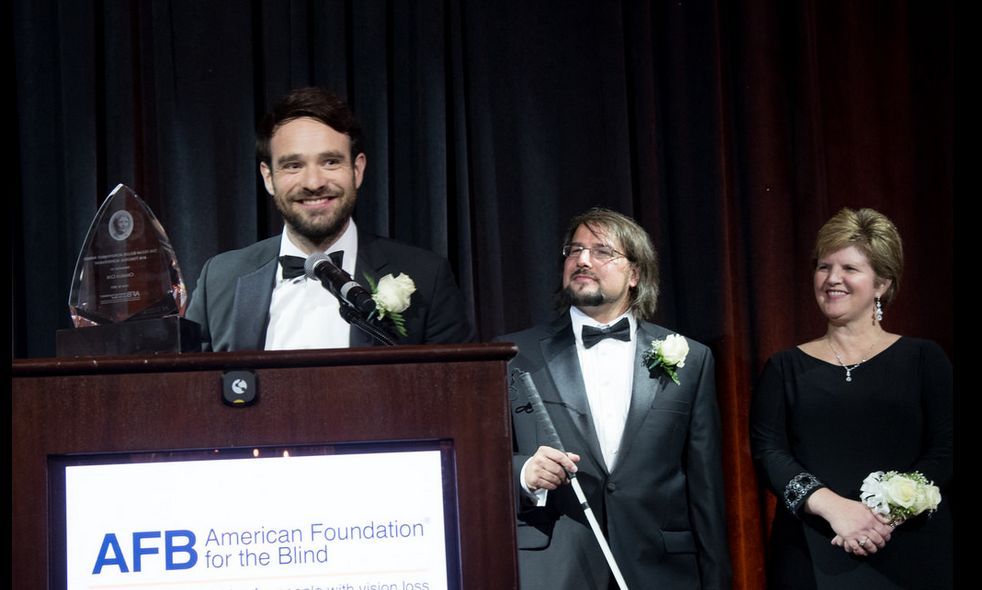 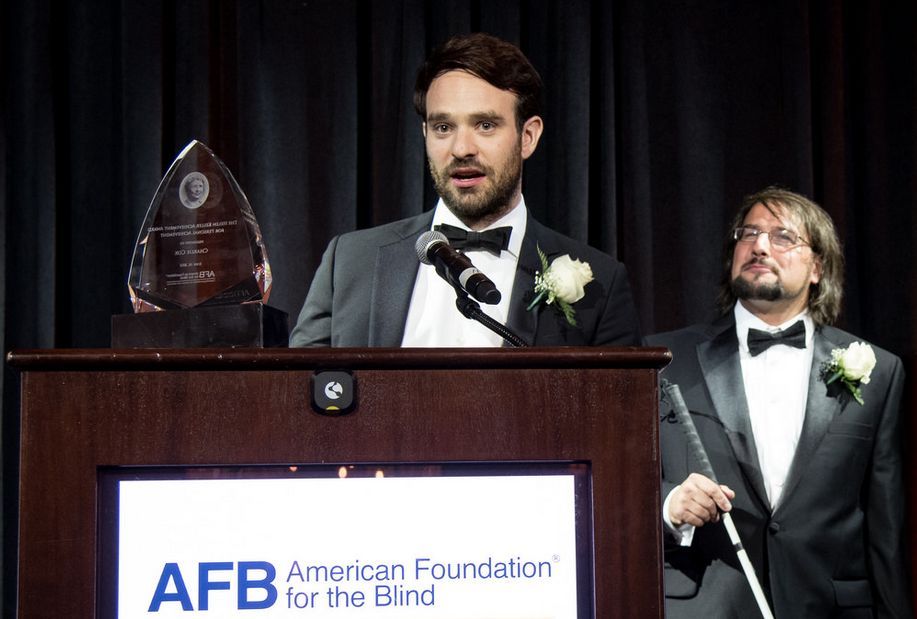 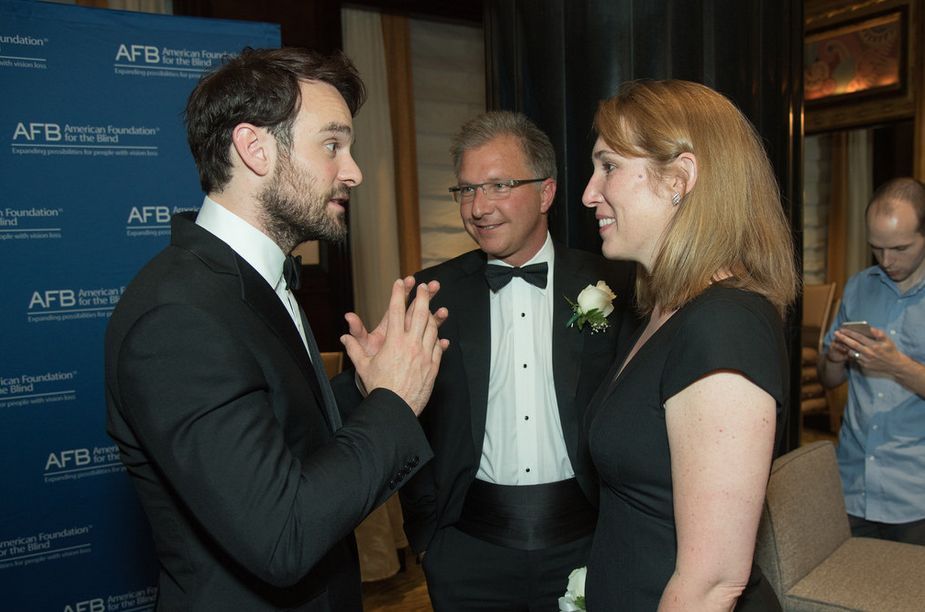 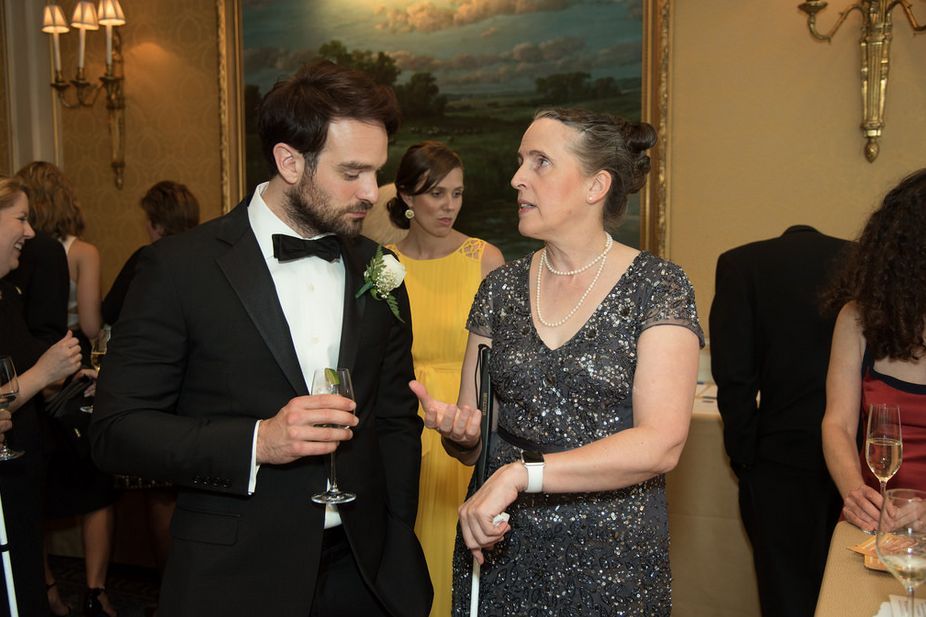 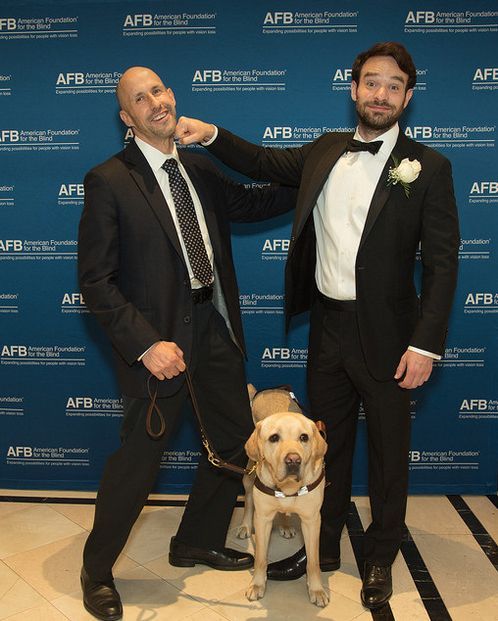