her name emely. and she wrote about this happy fact in internet 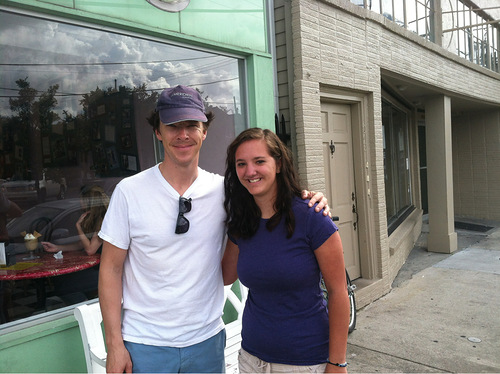 I met Benedict Cumberbatch today at an ice cream shop in New Orleans.

I’m visiting from New Mexico for a conference, and a friend of mine lives here and took me out to the place today. We were sitting maybe five minutes and I look up see him walking in.

I freaked out. On the inside. And stared like a freak. Benedict Cumberbatch just walked into the ice cream shop.

Him and his friend ordered ice cream, and because people are asking he got some sort of coffee flavour I believe but not 100% sure in a waffle cone, and then proceeded to sit at the table next to us.

Anyway I was trying to explain to the other girls I was with, one had no idea and the other had heard of him, and I was dying. I didn’t want to be that annoying person, so I waited until they were finished to approach him.

He gets up to walk out and I get up too and say “Excuse me sir” and he turns and looks at me and I say “I don’t mean to be a bother, but I’m a huge fan of yours”

And he breaks out into this huge grin and kinda looks at the floor and says “thank you!” and I’m clutching my phone and I say “I’m sorry, but could I get a picture with you?” and he says “of course!” and we go outside.

He turns to his friend and asks if he would take a picture, and his friend said “sure no problem!” Benedict comes next to me and PUTS HIS ARM AROUND ME and I put my arm around him and felt his back and I died again.

His friend took the picture and said “I think I got it!” and Benedict said to me “pull it up, make sure it’s a good one!” so I do and we all 3 look at it, me still freaking out that he’s 3 inches from me, and he says “it’s a great one!” and I died.

He then asked why I’m in New Orleans and I explained that I was here for a volunteering conference to help clean up the city. He turns and looks at me and says “I’ve seen thousands of you guys everywhere!” he asks when I’m leaving and I say “tomorrow.”

He starts slowly walking away as I say “thank you so much!” and then I just blurted out “We’re all waiting!” and he stops walking and laughs and says “you know I do other things! But we are going to start filming in January and I believe it’ll be out next fall!”

He waves, says to have a safe trip home, and walks away, and I walk back into the store, a world completely oblivious to everything that happened. 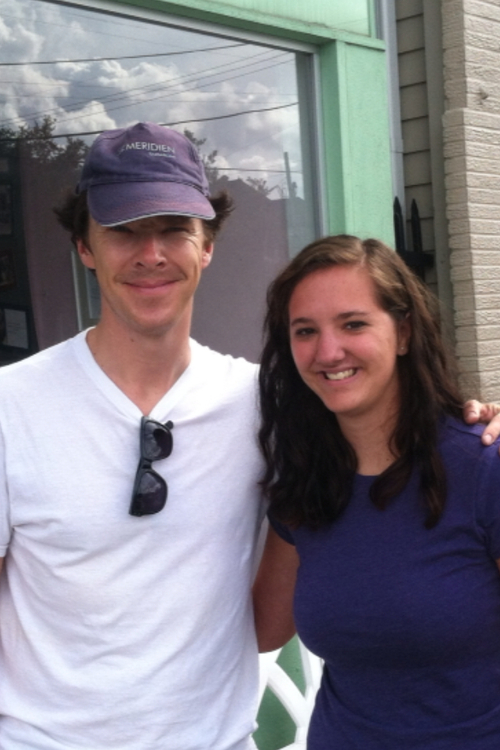 Thought some of you might enjoy this little anecdote…

I got talking to a girl at my job interview today and the subject of Benedict came up quite quickly because we were both huge fans. We swapped a few stories, she looked jealous of mine, and then she crippled me with too much cuteness with hers: She was in town one day with her big sister and toddler nephew, when suddenly the little one started pointing at something and calling out “Sherwock, mummy! Sherwock!” They looked over and saw Benedict, looking down at the little boy and grinning. They started to apologise to him but he said not to worry, and when the little boy toddled his way over Ben knelt down and said hello and told him that he liked his jumper, and it looked like one of John Watson’s. She couldn’t remember what more was said, but she was telling me that he was really, really sweet and ever so cute with her nephew, who now wants to be a detective like ‘Mr Sherwock’.
Awwwwwww!