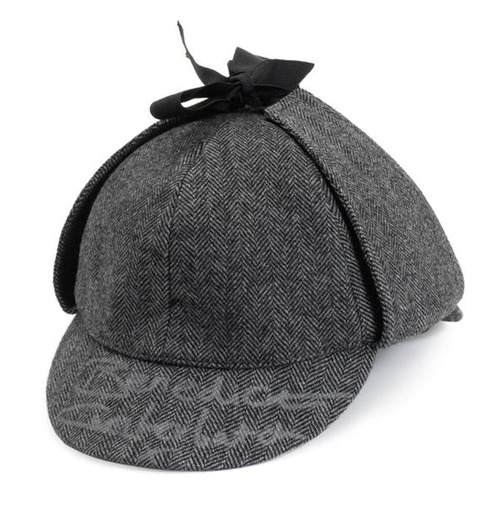 Benedict Cumberbatch is supporting the drama training of upcoming actor Ben Eagle by donating items for auction at Bonhams, including an iconic, signed deerstalker.

Screen identical to the hat gifted to Sherlock Holmes at the beginning of The Reichenbach Fall, Benedict has signed the peak of the Jaxxon branded hat in striking silver marker, as well writing an accompanying letter that also carries his signature. Included as part of Bonham’s upcoming Entertainment Memorabilia auction, the deerstalker has a minimum sale estimate of £300. Funds from the auction will be used to provide fees for his friend Ben Eagle’s ongoing education at the prestigious Central School of Speech and Drama in London.

“Benedict has been brilliant in donating a couple of very exciting items for my fundraising,” Ben told Sherlockology. “He is keen to support my training as an actor and I’m delighted and humbled that he has given me such support.”

Founded in 1906, the Central School of Speech and Drama is one of the most prestigious drama training institutions in the United Kingdom, attracting students from around the world. Counted among its alumni are BBC Sherlock’s own Martin Freeman and a legendary Sherlock Holmes in the form of Jeremy Brett, as well as acting titans like Laurence Olivier and Judi Dench, and numerous others including Andrew Garfield, Jason Issacs, Rupert Everett, Christopher Eccleston, Catherine Tate, Dawn French, Kristen Scott Thomas, and Carrie Fisher.

“I’m very lucky to be training at a top London drama school which is AMAZING,” Ben confessed. “Actor training is expensive and very intensive, which means any support I receive is enormously appreciated.”

The sale of the deerstalker - lot number 140 - takes place on Wednesday December 12th 2012. The Entertainment Memorabilia auction begins at 12:00GMT at Bonham’s auction house in Knightsbridge, London, but bids can be placed in advance online on the item listing page. The auction includes hundreds of items from music, film and television. Viewings of all items for sale can be made in person from December 9th 2012. Full details can be found on Bonham’s website.

If you want to follow Ben Eagle’s progress at the Central School of Speech and Drama, you can find him on Twitter @BenTheEagle.